As women working in technology, the road ahead is not always smooth. It’s like riding a mountain bike on a rough trail. Why take on that project? Why learn that tool? See or download the following SlideShare presentation with tips on finding a mentor to guide your ride.

Holly Justice: Thoughts on Advancing the Careers of Women in Technology
The road we travel as women working in technology is not always going be a smooth ride. It’s like riding a mountain bike on a rough trail.

Let’s build our endurance by finding and using mentors along the way!

END_OF_DOCUMENT_TOKEN_TO_BE_REPLACED

I’m pleased to be giving a Lightening Talk at the Advancing Careers of Women in Technology event in Portland, Oregon on April 17th.

Special Thanks to Event Creators:

Here is a link to my speech page and supporting materials!

Find Your Mentor and Move Ahead

This post is for those of you who wonder:

END_OF_DOCUMENT_TOKEN_TO_BE_REPLACED

Do you want all of your Linked In connections to know every time you make a small change to your profile?

Here is a quick video on why broadcasting everything could be irritating to your connections and how to prevent the problem. 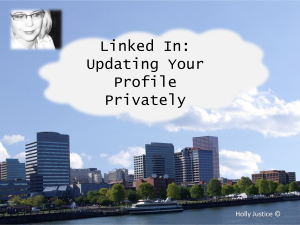 What does it take to convince the “forget it” crowd that social media has value?
Do you use Twitter, Facebook or Linked In?
How do you keep your image professional?
How does social media serve you? 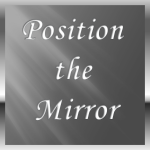 I love using Linked In to look for jobs. My favorite feature on Linked In is the tool that allows me to save my job searches and set up e-mail alerts. Below is a quick demonstration:

Now if I forget to check Linked In, no worries. I’ll receive a daily or weekly e-mail each time a job that meets my criteria is posted.

How do I get in there?

Today Facebook is big news on the stock market thanks to the IPO. I’ll be honest. I have worked hard to make Facebook a manageable, fun experience.

For me Facebook is a personal, highly effective platform where I keep up with friends and family despite incredibly busy schedules filled with work and college. Check out the next page for tips on how to save time and preserve your ego.

Start by asking what do you need out of social media?

Every social media platform exists to solve a problem. Just like computers are part of our modern world, these tools are the new wrench to turn on rivers of information.
Read more on the next page.

As I became an advocate for social media tools like Linked In, Twitter, Facebook and blogging, it quickly became apparent most people offline suffer from fear of transparency.  What if someone finds out something about me?  What if they get to know all of me, who I am under the skin?

Some of you know this reaction well. When you mention a tool, the person’s reaction is to tell you all the horror stories they know to justify their fear of social media.

But hold on a moment.  Is spying and negative gossip the reason social media exists?  Or are these platforms simply neutral tools to be used for either positive or negative reasons?

Alert!  We have a social media gap!

Recently I attended a job hunting gathering in Hillsboro, Oregon at a local community college. Over sixty of us were gathered in a large lecture hall discussing Linked In.  One person asked if there were any new networking tools to use besides Linked In.  The leader had no suggestions.  I promptly suggested Facebook, Twitter and blogging.

The reaction was shockingly negative. As I turned to look around at the crowd, I saw frowns, shaking heads and grumbles.  At least 80% of the crowd was visibly upset and rejecting my suggestion.  The group leader quickly stated “Linked In is the only one that won’t get you in trouble.”

I consider this a very large social media gap since this meeting was being held in the middle of the Oregon Silicon Forest community.  Almost every open job for the job seeker involves making computer hardware or software.

So what do these terrified job seekers need to begin moving forward in social media?

The answer on page 2…